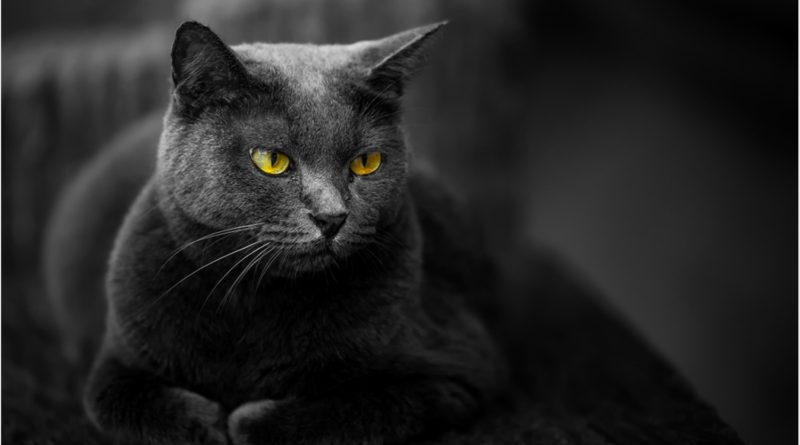 This virus has been described as a zoonotic virus and might have originated from bats with an unknown intermediate host. Scientists have suggested a few potential intermediate hosts, such as pangolins, rodents, and bats. However, the transmission dynamics associated with the jumping of the virus between different species, including humans, are not clear.

Several studies have been conducted to identify the wide range of species that can be infected by SARS-CoV-2. Researchers have determined the affinity of angiotensin-converting enzyme 2 (ACE2) from different animal species for the SARS-CoV-2 spike protein (S). Previous research has found that susceptibility to infection varies from one species to another. Higher susceptibility to SARS-CoV-2 was found, in cats and members of the family Felidae, because of the high affinity of the virus to the ACE2 orthologue. However, dogs are found to be less susceptible to the virus due to the lower expression of ACE2 in the respiratory tract cells.

Earlier studies have reported that different viruses from the family Coronaviridae can infect domestic and wild felines. These viruses are classified as feline coronaviruses (FCoVs). These studies have shown that felines infected with coronavirus can develop mild enteric disease (feline enteric coronaviruses; FECV) or viruses can undergo mutations and create feline infectious peritonitis virus (FIPV). FIPV is more infectious and can cause severe disease that can lead to death.

Typically, pet cats share a close relationship with their owners. Also, felines in the zoo or wildlife center are very much connected with their keeper. Hence, an increasing number of reports of feline infection with SARS-CoV-2 has created the need to understand the clinical implications of SARS-CoV-2 infections in felines.

Now, a new systematic review has been published in the journal Animals that focuses on the clinical symptoms in felines diagnosed with SARS-CoV-2 worldwide.

The World Organisation for Animal Health (OIE) website was the primary official source of information. Here the authors found evidence of 76 domestic cats in the US with confirmed SARS-CoV-2 infection. However, only 22 documented relevant information regarding the occurrence or absence of clinical signs among these cases.

A global distribution pattern was observed concerning felids infected with SARS-CoV-2. However, most cases were reported in the Americas and Europe. Such an observation aligns with the fact that these regions were massively hit by COVID-19 infection. Limited studies are available on felids infection from other badly affected areas, such as India and Brazil.

Both domestic, as well as wild felines, have been reported to be infected with SARS-CoV-2. The following section describes the clinical symptoms associated with the disease.

In 54% of the cases, the cats were asymptomatic. They were identified because their owners were diagnosed with COVID-19. So the researchers, out of curiosity, screened the cats for the disease and interestingly found them to be COVID-19 positive.

In the remaining 46% of the cases, the cats showed clinical symptoms associated with COVID-19 infection. Among these infected felids, 26 survived, and six died owing to the infection.

One of the reports indicated that cats developed shortness of breath and tachypnea. They were also diagnosed with hypertrophic cardiomyopathy and Mycoplasma haemofelis infection.

One of the cats that died from the disease showed clinical symptoms such as nasal discharge and neurological signs such as head pressing. The necropsy symptoms indicated that the cat developed bacterial meningoencephalitis.

The cats infected with COVID-19 were also diagnosed with anemia, thrombocytopenia, and hypertrophic cardiomyopathy. An ultrasound examination showed a bronchointerstitial pattern in the lung.

Additionally, tissue analysis revealed signs of severe pulmonary edema, hemorrhage, and congestion in the infected cats. Some of the other symptoms, such as vomiting, mouth ulcers, and diarrhea, were also reported.

Several cases of SARS-CoV-2 infection in wild felines have been reported around the world. Scientists have revealed that members of the genus Panthera (e.g., tigers, lions, and snow leopards) and genus Puma (e.g., Puma concolor) have been infected by the virus.

Infection of wild felines with SARS-CoV-2 is associated with human-animal transmission, where the staff responsible for caring for these animals were COVID-19 positive and might have transmitted the disease to the animals.

All animals that tested positive for SARS-CoV-2 (except for one asymptomatic tiger) showed clinical signs such as coughing and wheezing. In addition to the respiratory symptoms, other symptoms such as lack of appetite and lethargy have also been reported. 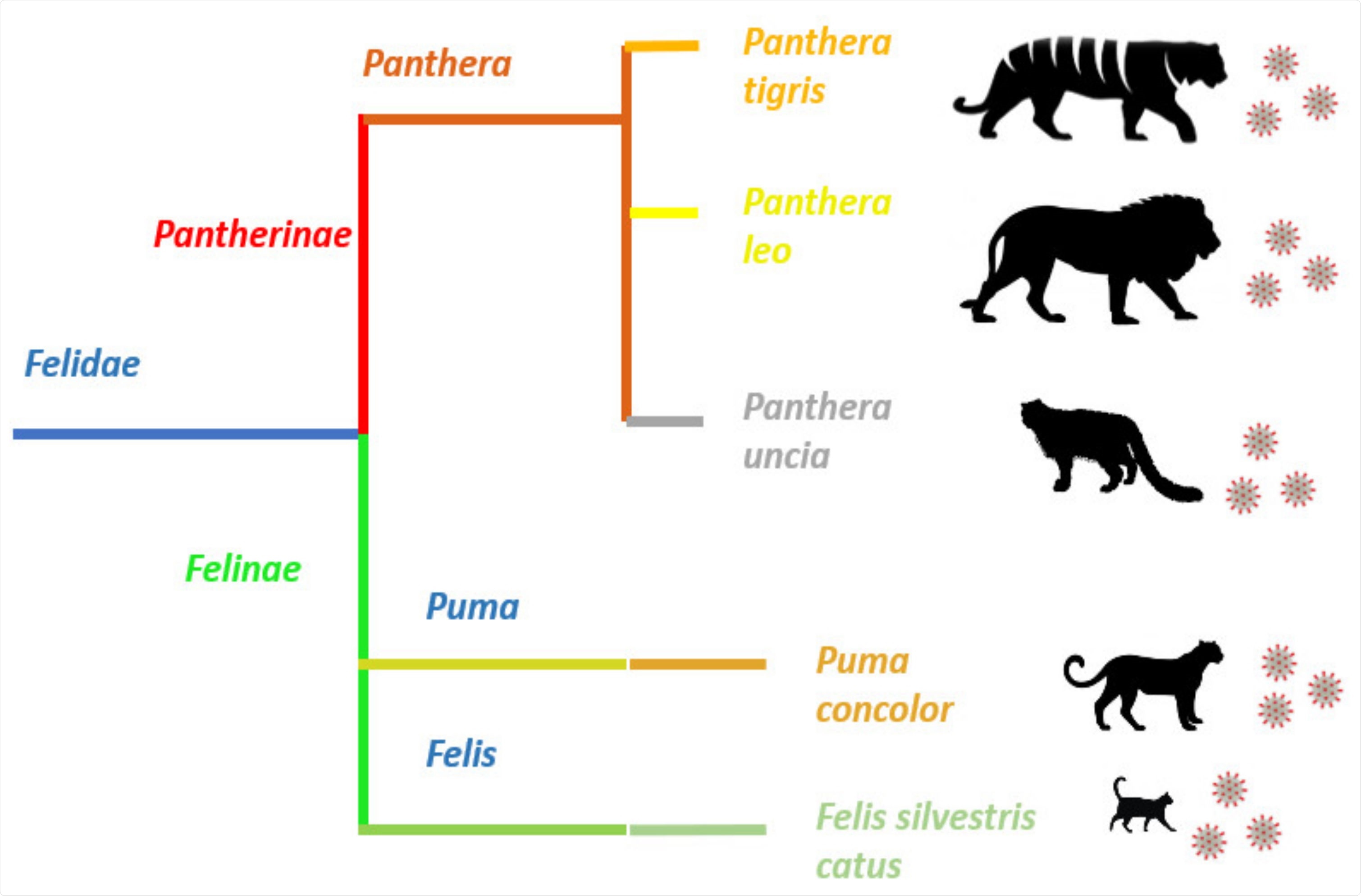 Felid species reported with SARS-CoV-2 infection. SARS-CoV-2 infection has been reported in the members of two subfamilies, Pantherinae and Felinae, belonging to the family Felidae. Despite the evident morphological differences between pantherids and felines, the virus is capable of infecting members of these two dissimilar families and causing very similar clinical signs.

Experimental studies have shown that cats previously infected with SARS-CoV-2 can be re-infected with the virus. However, infected cats could not transmit the infection to another healthy cat.

The authors conclude, “Given the current complex situation which has arisen due to the COVID-19 pandemic and the emergence of viruses with zoonotic potential, it is of paramount importance to establish both national and international surveillance systems to closely monitor the development and occurrence of SARS-CoV-2 and other agents of public health relevance in animals and its possible “spillover” to humans and the possible “spill-back”—causing public health concerns—highlighting that all efforts should be focused on the concept and implementation of “One Health/One Medicine” to understand how aspects involving the environment, animals, and humans could contribute substantially to the control of epidemics in the near future.” 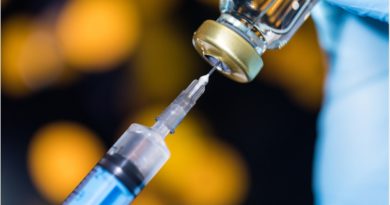 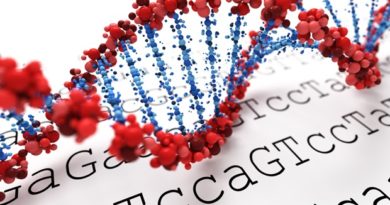 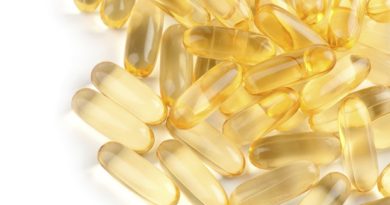