With infection, symptoms vary from asymptomatic to fever and dry cough and finally to severe pneumonia. The severity of the disease also varies between different groups of people. Elderly patients have a higher risk of respiratory failure that can be fatal.

“Fatal respiratory failure due to lung damage in coronavirus infection is attributed to rapid virus replication and excessive immune responses,” say researchers from the University of Copenhagen in a new study.

The viral load within patients positively correlated with the severity of the disease. In addition, it was found through sputum and pharyngeal swab samples that the coronaviruses could reach a very high titer of 10^8-10^10 copies/ml within the upper respiratory tract of the affected patients.

This study proposes a mathematical framework to analyze the effect of the viruses on type I interferon (IFN-I) signaling, which is part of the innate immune response. IFN-I brings about natural killer cell activation, which in turn causes the activation of macrophages.

A pre-print version of the research paper is available on the bioRxiv* server, while the article undergoes peer review.

Battle between the virus and the immune system

All three coronaviruses were found to interfere with the IFN-I signaling pathway in the respiratory cells of the patients. IFN-I was initially produced by the infected cells and activated IFN-stimulated genes and natural killer cells (NK cells). The NK cells produced IFN-ϒ that led to the activation of macrophages.

“Thus, macrophages are capable of mediating an excessive potentially self-amplifying innate immune response by positive feedback if activated beyond a tipping point,” says the team.

The over-activated macrophages and inflammatory cytokines lead to the leakage of substrates from the blood into the respiratory tissue. Thus, the leading causes for mortality associated with coronavirus diseases are cytokine storm, unregulated production of cytokines, and high risk of multiple organ dysfunction even after the viruses are removed.

What did the study find? 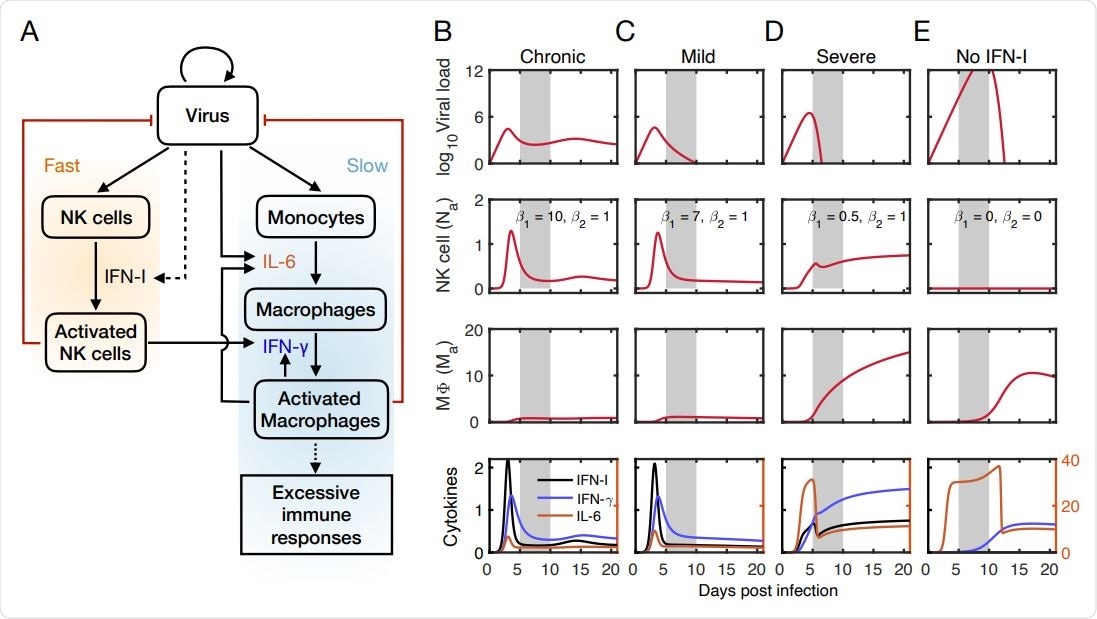 The model also found that interactions between the immune system and the virus can lead to chronic patterns with recurrent disease. The chronic pattern is caused by NK cells due to a strong reaction with the virus that reduces viral load. This prevents macrophage accumulation that results in persistent viral load.

What did the authors conclude?

“Our model highlights the implications of the dysfunction of NK cells in the innate immunity caused by the insensitivity of IFN-I response to viral infection”, says the team.

The model discussed in this study had certain limitations. For example, it did not consider the anti-inflammatory cytokines secreted by macrophages that led to a reduction in recruitment of macrophages, the model considers only a single site infection, and data for virus or cytokine kinetics before the symptom offset was lacking.

“Our model gives a general way to think about how to alter the treatment of the patients who are at different stages when admitted to hospital. The protective and pathogenic roles of NK cells need to be delicately balanced when targeting IFN-I in combination with other therapies”, adds the team.

Study could lead to new antibiotics to fight bacterial infections

Benefits of drug research are not being shared equitably among study participants, indicates study

Basics “with a twist” fill the center-of-store aisles, bringing innovation in the form of special diet adaptations, better-for-you options, clean and innovative